Warning: count(): Parameter must be an array or an object that implements Countable in /home/customer/www/amaaust.org.au/public_html/wp-content/plugins/ewc-donate-custom/includes/cmb2/CMB2.php on line 527
 Archbishop Hovnan Derderian’s Congratulatory Remarks – Armenian Missionary Association of Australia
Close 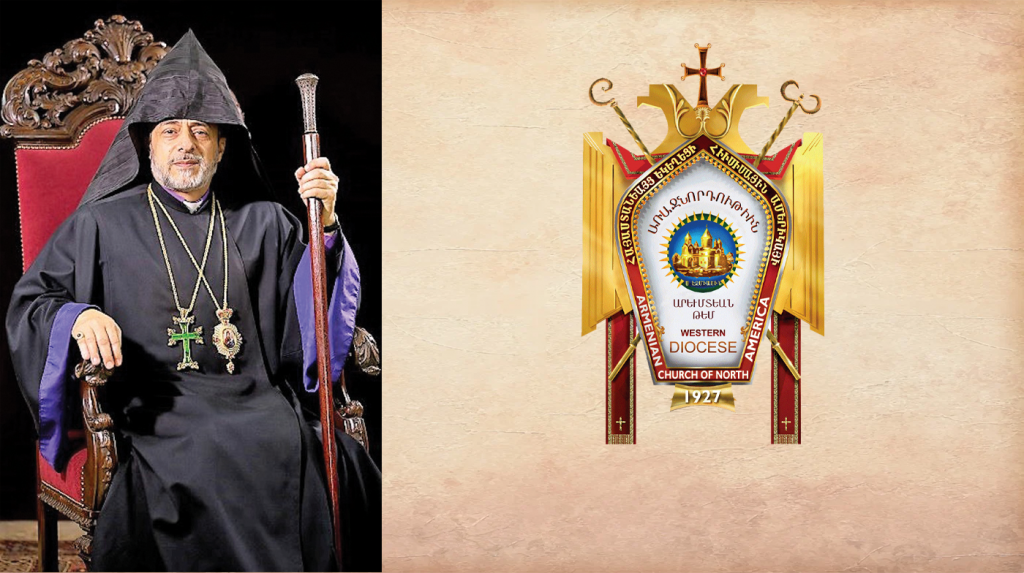 The Holy Gospel is Our Father and the Holy Church is Our Mother. (Vartanank)

These words, which echoed from the New City of Vagharshapat (Holy Etchmiadzin), are the two Pillars that define the spiritual and moral character of each Armenian Christian.

Indeed, throughout centuries, these sacred truths have been the basis of our ability to overcome the trials and tribulations of each historical time period and have been the source of our existence today.

Furthermore, the reliance on these everlasting truths comfort us and instill in us hope in these present times of great uncertainty.

We are delighted in knowing that this year marks the 175th Anniversary of the founding of the Armenian Evangelical Church, a Church that has remained loyal to spreading the Gospel of our Lord and Savior Jesus Christ since the day of its establishment. The Good News that was disseminated by God Incarnate illuminated the entire world and transformed the life of humanity, ensuring an eternal life with God.

The celebration of the 175th Anniversary of the Armenian Evangelical Church grants us the opportunity to not only reflect on the past, but to equally focus on the present and future of the Church.

Founded in 1846 in Constantinople, the Armenian Evangelical Church progressed within the Armenian communities. We agree with the words of His Beatitude Archbishop Malachia Ormanian that “…indirect relations with the Western world was granted at a time when the expansion of these relations were limited.”

The contributions of the Armenian Evangelical Church are vast, especially in the overall spiritual development of our nation’s life. We wish to highlight the following.

The translation of the Holy Bible from classical Armenian to modern Armenian in the mid-19th century, when our language was in its transformational phase, was a magnificent feat, allowing the radiating the light of the Gospel to enter the households of the faithful.

The Armenian Evangelical movement played a vital role in the intellectual renaissance of our people through prominent new publications and works. These included “The Dawn of Ararat,”(Արշալոյս Արարատեան), “Tidag”(Դիտակ) and “Pyuragan”which continue to enrich the cultural and literary life of our nation. Among these jewels is the “Haigazian Armenological Review,” the academic journal specializing in Armenian studies. Moreover, Haigazian University, a renowned institution of higher learning has been the source of academic enrichment for thousands of Armenian and non-Armenian students.

The Armenian Genocide claimed the lives of 1.5 million Armenians including the faithful of the Armenian Evangelical Church. As a result of the first Genocide of the 20th century, a number of educational institutions founded by prominent Armenian Evangelical Church leaders were destroyed, devastating our people who have tremendously valued the gift of education throughout history.

However, the resilience of our people was evident following the Genocide. The Armenian Evangelicals believed in the unrelenting dedication, undying spirit, and the reawakening of our people as new humanitarian and educational institutions were established in the United States of America, France and elsewhere. Undoubtedly, the milestones of the Armenian Evangelical Union of North America have been great in number since its establishment 50 years ago. Its organizations, schools, educational, and cultural institutions have allowed the Armenian Evangelical Church to continue its mission of spreading the Gospel of Christ, our Lord.

The mission of the Armenian Evangelical Church is noteworthy in the Motherland, especially after Armenia gained its independence and where thousands of our compatriots receive spiritual nourishment and humanitarian assistance.

As a servant of Christ, our Lord in the Armenian Apostolic Church, we can attest that each structure, whether secular or religious, is undoubtedly faced with great challenges. The celebration of the 175th Anniversary of the Armenian Evangelical Church is a testament of God’s glory, for this noble institutions has weathered many storms and has stood the test of time.

We rest assured that the Armenian Evangelical Church will remain loyal to its God-pleasing mission, and will continue to contribute to the prosperity of our people through educational and humanitarian endeavors.

Indeed, the love of Christ supersedes all things. It is our genuine wish and heartfelt prayer that the Armenian Evangelical Church continues to be led by the divine love of our Lord and Savior Jesus Christ, thriving in its ministry and mission for the glory of God and the prosperity of the Armenian nation.

And now abide faith, hope, love, these three; but the greatest of these is love.(1 Corinthians 13:13)