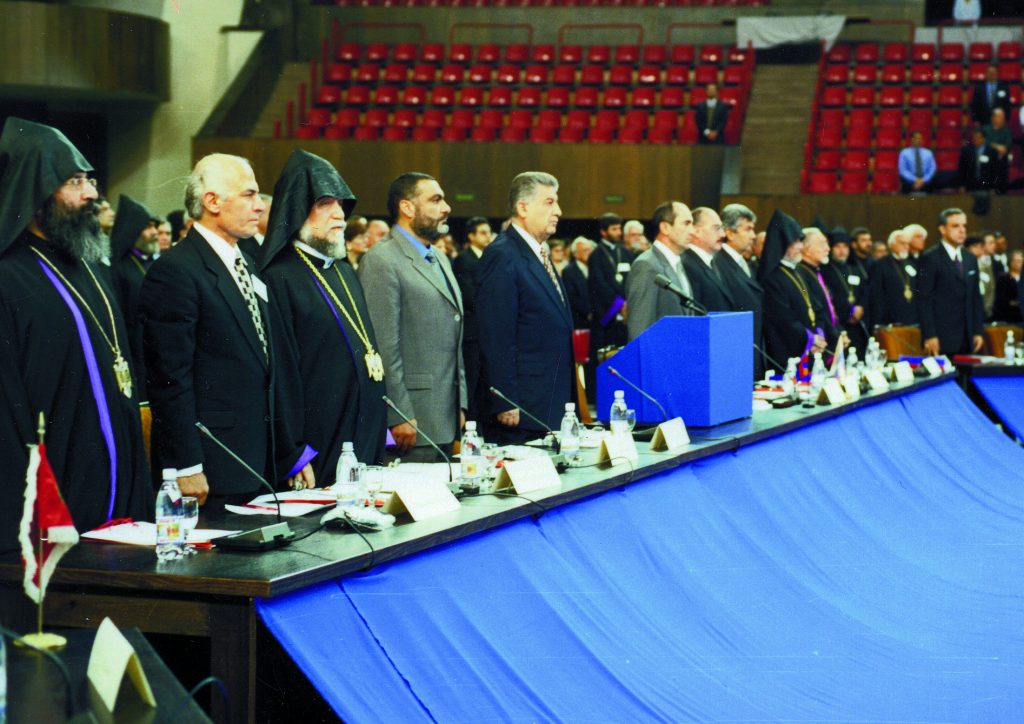 “At the Armenia Diaspora Conference in Yerevan in September 1999, as representative of the Armenian Evangelical Community, Rev. Movses Janbazian addressed the audience. But among all the political and religious speakers, Janbazian’s was the strongest and most nationalistic.” AIM Magazine, October 2000

Your Excellencies, Presidents of the Republics of Armenia and Nagorno-Karabagh, your Holiness, and dear compatriots.

On behalf of the Armenian Evangelical World Council and the 155 Armenian Evangelical Churches of the Homeland and the Diaspora, we greet you with warmest Christian love. We also wish to express our congratulations and gratitude to those who conceived the idea of this Armenia-Diaspora Conference and worked hard to make it a reality.

The issues faced by Armenia and the Diaspora are many and serious. Therefore, this historic conference places a burden of heavy responsibilities and serious commitments on the shoulders of its organizers and participants. This is the reason why the Armenian Evangelical Church is present at this conference with the prayerful participation of the representatives of all Armenian Evangelical regional church unions in the world, namely, Rev. Yuri Avanesyan from Armenia; Rev. Megrditch Karagoezian from the Middle East; Rev. Dr. Vahan Tootikian from North America; Rev. Gilbert Léonian from Europe; Rev. René Léonian from the Eurasian region; Mr. Hampartsum Moumdjian from South America; Mr. Borros Halladjian from France; Mr. Andrew Torigian, representing the Armenian Missionary Association of America; and Rev. Movses B. Janbazian, Secretary of the Armenian Evangelical World Council.

Currently, the Armenian Evangelical Church, under the blessings of God, continues to minister to our people in Armenia and in 20 other countries around the world through its more than 155 pulpits; 185 ordained ministers; 25 educational institutions; Haigazian University of Beirut (the only Armenian institution of higher learning outside Armenia); many social service centers; publications; youth centers; and significant endowments and foundations dedicated to charitable, educational and humanitarian purposes. Specially, through their missionary arm, the Armenian Missionary Association of America, Armenian Evangelicals render inestimable services to our people in the Diaspora, in the Homeland and in Artsakh.

Our understanding of the Armenia-Diaspora mutual relationship rests on two basic premises.

The first of these premises is that all human beings who confess to being Armenian comprise one nation, the Armenian nation; they have one homeland, the historical Armenia; and both the Armenian nation and Armenia are under one flag, the red, blue and orange Armenian tricolor.

The second basic premise on which our understanding of the Armenia-Diaspora mutual relationship is based is that unity does not mean uniformity. We believe that unity is having a common purpose on essential issues and cooperation on common objectives. In other words, attainable unity in the Diaspora, and between Armenia and the Diaspora is necessarily based on the following principles: – non-negotiable and unreserved unity, and even uniformity, in essential and vital issues; – freedom and understanding in non-vital and non-essential issues; and – mutual love and respect in all issues.

The Armenian Evangelical Church believes that the following are the major essential issues the Armenian nation is facing at present:

We Armenian Evangelicals also have another serious concern, which relates to the current weakness of the Christian faith of our people. For various reasons, our people in Armenia and the Diaspora have lost our former spiritual values, the faith of our forebears and the vision of Gregory the Illuminator, which have played such an important role in the development of our national image, character and cultural heritage. In order to reclaim our historical and genuine national identity, we have to rediscover the Gospel-inspired holy and pure faith of our fathers. We believe that if we cannot live as a Christian nation, the independence that we have achieved, and the lands we have liberated, as well as the economic, social and scientific progress we hope to achieve, all will be in vain. It is impossible to build a good world without building up the inner spiritual world of people. It is impossible to create a noble culture, lifestyle, society or civilization without adhering to noble principles, truth, and spiritual values, the purest source of which is God the Creator, the Lord and the Savior of the universe.

Therefore, it is our highest hope and ardent prayer that when during the first year of the third millennium we joyfully and with pride celebrate the 1700th anniversary of the adoption of Christianity as the state religion of Armenia, all of us in Armenia and in the Diaspora will experience the beginning of a new spiritual revival at government, church and community levels, and we shall once again rededicate ourselves as a nation to Jesus Christ.

In 301 A.D. our forebears made a covenant with Jesus Christ. If we fulfill our commitment to that covenant, then God will abundantly bless our small but precious nation, and He will make our nation a source of blessings not only to its sons and daughters, but also to its neighboring peoples and to all humanity. We believe that this is our nation’s reason for being; this is our people’s mission in the world; and this is the God-ordained destiny of our Haigaznian (Armenian) race.

May God bless the Republic of Armenia and the children of our nation living in the Motherland and in the Diaspora, now and always. Amen.