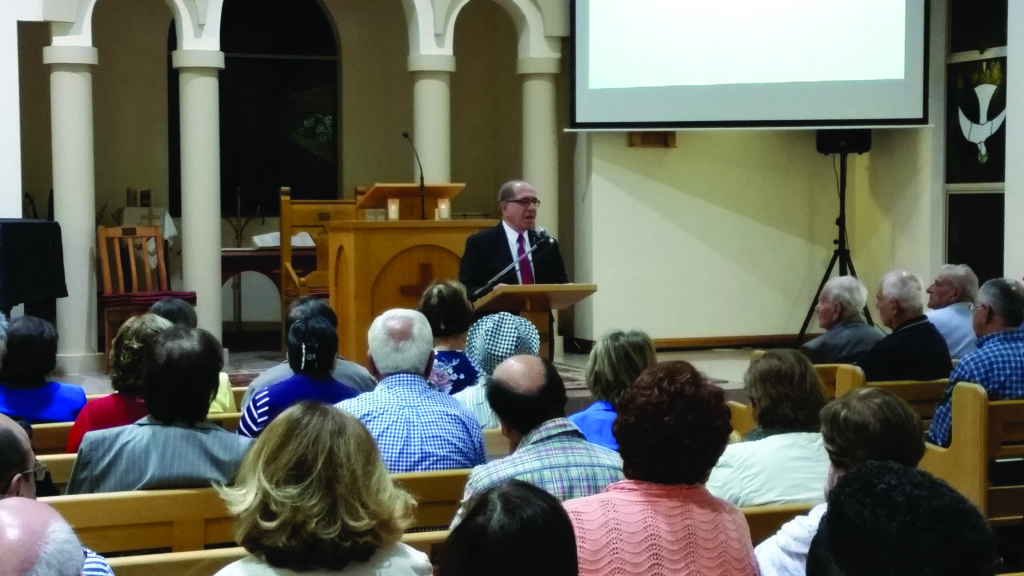 2016 marks the 15th anniversary of the founding of the Armenian Missionary Association of Australia (AMA- Australia). Since its inception, AMA-Australia has provided the best possible volunteer work through its Board of Directors, no paid staff, and under the leadership and advice of its President and Executive Director Rev. Dr. Krikor Youmshajekian.

To help celebrate this milestone, Zaven Khanjian, Executive Director/CEO of the Armenian Missionary Association of America (AMAA), and his wife Sona travelled to Australia from March 31 – April 12. During their brief but fruitful visit, they encouraged AMA-Australia and the Church Community with their inspiring words and warm fellowship.

Their visit began with a Welcome Dinner at the Social Hall of the Armenian Evangelical Uniting Church of Sydney with the AMA-Australia Board, together with the Church Council and committee members. It was an informal night of fellowship where old friendships were re-kindled and new friendships formed. Mr. Khanjian briefly talked about the work that the AMAA is doing around the world and the future directions that are planned.

On Sunday April 3rd, Mr. Khanjian preached at the AMAA Sunday Service held at the Armenian Evangelical Uniting Church. His message exhorted all to reflect the light and love of Christ not only in words but also in deeds, as individual believers and also collectively as the body of Christ. Rev. Dr. Youmshajekian presented a brief report to the congregation about the activities of the past 15 years and thanked Rev. Hagop Sarkissian, Pastor of the Church, and the congregation for their partnership. An Appreciation Luncheon followed at St. Andrew’s Uniting Church Memorial Hall in Longueville, to thank the generous sponsors and dedicated volunteers of AMA-Australia over the past 15 years.

During his visit, Mr. Khanjian met with the Board of Directors of AMA-Australia to discuss future directions and plans. His encouragement and advice were much appreciated. He highlighted the AMAA Centennial Capital Campaign and encouraged the Board to embrace it as part of the AMAA family.

On Wednesday and Thursday, April 6 and 7, Mr. Khanjian presented two lectures to the Armenian Community. The first was about the prominent journalist Hrant Dink, who was martyred almost ten years ago for his outspoken advocacy about the misfortunes of the Armenians during the Armenian Genocide. The second lecture was about notable unsung heroes during the Armenian Genocide. Mr. Khanjian presented the lives and the tremendous work done by Rev. Aharon Shirajian, Rev. Dikran Antriassian and Hrant Guzelian. Both lectures were well attended and highlighted the positive influence of God’s word through Armenian Evangelical preaching, teaching and education in the lives of the Armenian community in the Middle East. The AMAA is striving to continue this work, despite the ever increasing instability in the region. Mrs. Khanjian capably read excerpts from the books that Zaven Khanjian had authored, impressing the audience.

Following the Church service, the 15th Anniversary Fundraising Luncheon of AMA-Australia was held at the Hamazkayin Arshak and Sophie Galstaun College Nalbandian Hall. A sub-committee, made up of several talented and enthusiastic youth, planned, organized and managed the event. The theme was Armenian Village with its Bread and Cheese table, in keeping with the last year’s project of AMA-Australia of renovating Choratan Village School Playground in the north east border of Armenia. On this special occasion, the AMA-Australia website was launched (amaaust.org.au), and the achievements of the past 15 years were detailed in a short presentation, highlighting the over $632,000 raised to support relief and educational projects in the Middle East and Armenia. Mr. Khanjian addressed the guests, thanked them for their support and encouraged them to continue with this noble mission. Mr. Khanjian recognized the President and the Board of Directors of AMA-Australia and presented each one of them a Certificate of Appreciation. Through the generous gifts of sponsors and guests, over $40,000 was raised to support various relief projects. The completion of a special project was announced to restore the Memorial Hall of the Armenian Evangelical Central High School of Ashrafieh in Beirut, Lebanon, in memory of Mr. and Mrs. Mick and Nora Rozanski. The establishment of an endowment fund of $500,000 in the name of Anthony Rozanski Memorial Fund was also announced to provide scholarships to outstanding students at the Central High School of Ashrafieh in Beirut.

On Sunday April 3, Mr. Khanjian had a Radio Hour interview with the Australia Armenian Hour of Special Broadcasting Service – SBC, presenting the history of AMAA, its worldwide activities, the Syrian conflict and the situation of the Armenians in Syria, especially in Aleppo. In the evening, Upon the Primate’s invitation, Mr. and Mrs. Khanjian, accompanied by Rev. Dr. Youmshajekian and Rev. Sarkissian, attended the Inaugural Banquet of the Diocese of the Armenian Church.

“Down Under is….Up Above,” said Mr. Khanjian at the conclusion of his visit. “We have a vibrant, God loving, passionate and a very hospitable community in Australia with a wealth of potential in all that is good for God and the nation.”