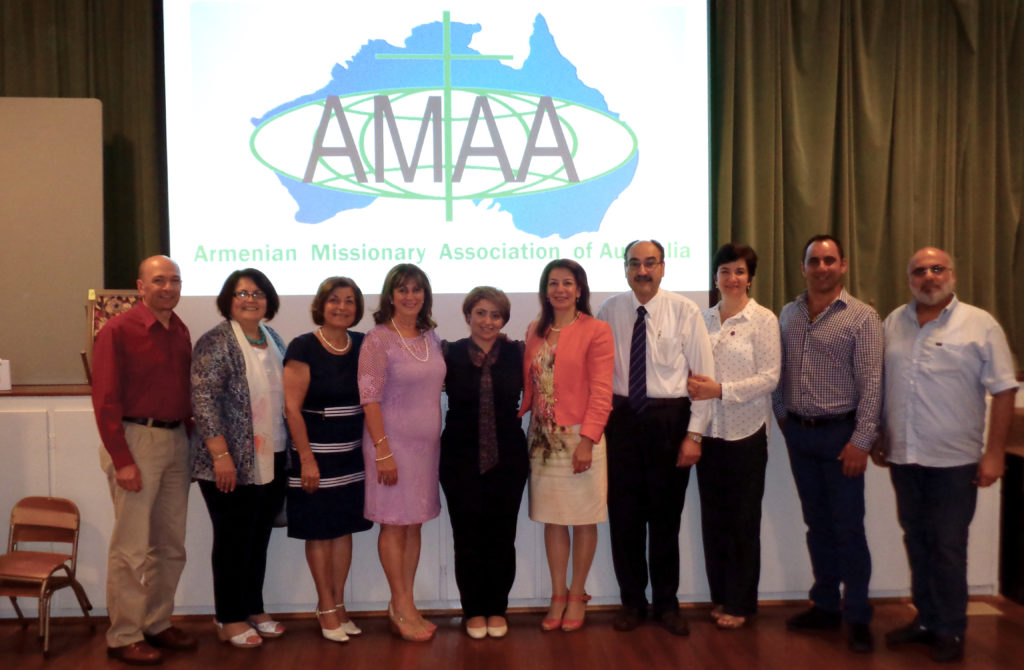 Since its establishment in March 2001, the Armenian Missionary Association of Australia (AMA-Australia) as a sister organization has been actively supporting the missionary work of the Armenian Missionary Association of America (AMAA). Through the tireless efforts of its founding members and those who have joined in subsequent years, the Committee has worked hard to bring awareness to the Armenian community at large, and specifically to the members of the Armenian Evangelical Church of Sydney as well as our friends, the needs of our fellow Armenians in Armenia and in the Middle East.

Over the years, AMA-Australia has organized programs and various fundraising cultural and social functions, allocating all the funds raised to provide for the needs of our brothers and sisters in Armenia and for the last few years in Syria and Lebanon. AMA-Australia also continues its sponsorship programs with 42 children being sponsored in Armenia and 24 students in Lebanon and Syria through the AMAA’s Sponsorship Program.

As in previous years, this year on March 15 AMAA Sunday was observed in the Armenian Evangelical Church of Sydney, followed by a Luncheon in St. Andrew’s Uniting Church’s War Memorial Hall, with more than 120 guests. After two consecutive years, funds were raised to support our brothers and sisters in Syria, both in Aleppo and Kessab, raising a total of 55,000 Australia dollars.

We turned our attention this year to the needs of the people living in bordering villages of Armenia, the most dangerous zone of the country. At our fundraising functions we were able to raise enough funds to construct a much needed Playground for the children of Choratan Village School. For this purpose, we invited Lusine Ohanian, External Relations Coordinator of the Armenian Missionary Association in Armenia, who works closely with the bordering villages and is familiar with their urgent needs. With a short film and photos, Lusine presented the much needed support required to help those who live with extremely limited resources. To raise the needed funds, we asked for donations and we are glad that many responded positively. We also had raffles on six paintings and an auction with an Armenian rug which were brought from Armenia for fundraising purposes.

We were also happy to have Louisa Janbazian, AMAA PR/Communications Coordinator from the United States, as our guest of honor. Mrs. Janbazian’s presence and encouraging words gave support to our program and fundraising efforts.

We would like to thank Lusine Ohanian and Louisa Janbazian for their presence and help to raise the necessary funds to complete the Playground Project in Choratan Village.

We hope that the Playground will be ready to be officially opened at the end of September with the support of Harout Nercessian, AMAA’s Representative in Armenia. Some of the AMA-Australia District Committee members are planning to be in Armenia around that time for the official opening. We would like to thank all those who have responded to our request and gave generously for this project.

May the glory be to the Father and His blessing upon us all and upon the missionary work of the AMAA.