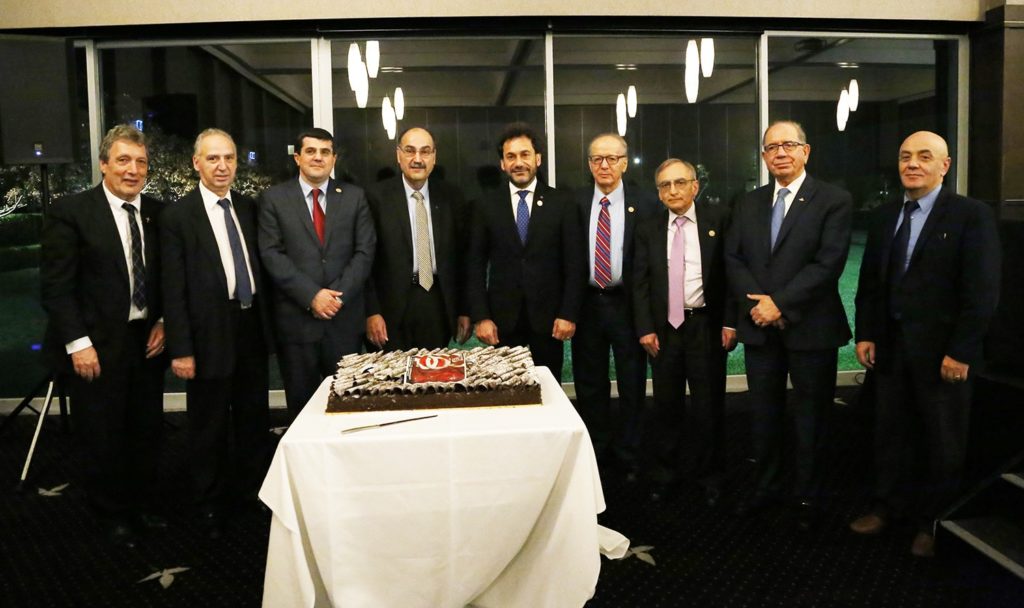 Under the Auspices of Artsakh Prime Minister Mr. Harutunyan, AMAA’s Centennial Celebrations in Sydney, Australia Raises $200,000 for the Renovation Project of Artsakh KGs

Sydney, NSW, AUS – The Armenian Missionary Association of America (AMAA), established in 1918 in Worcester, MA as a response to the suffering and the devastation of the Armenian Nation, proclaimed: We founded the Armenian Missionary Association of America with a deep conviction that our martyred Armenian nation will survive and will continue to exist as a nation… Therefore, it is indispensable that we contribute to the revitalization of our Armenian heritage and spiritual life. Rev. Mihran T. Kalaidjian, first Executive Director of AMAA, 1918 To celebrate its 100 years of outstanding service to the worldwide Armenian communities and its fundraising Campaign Faithful to Its Legacy and Embracing the Future, the AMAA and its partners are organizing worldwide Centenary Celebrations during 2017-18. The first one was held in New Jersey, USA on October 21, 2017.

The Centennial Celebrations in Sydney commenced on Thursday, March 15 with a special screening of Director Jivan Avetisyan’s ‘The Last Inhabitant’ movie, the story of the 1988 expulsion of an Armenian village Gyurjevan in Azerbaijan, USSR. The screening held in Hoyts Movie Theater was open to the public.  The following night, March 16, a cultural event celebrating the AMAA Centenary was held at the prestigious Concourse Theater and showcased performances by various Armenian and non-Armenian artists. Many distinguished guests were present at both events, including representatives of Federal and State officials, Representatives of the Uniting Church of Australia and His Grace Bishop Haigazoun Najarian Primate of the Armenian Apostolic Church of Australia and New Zealand. Artsakh State Minister Harutunyan expressed his heartfelt appreciation for the invitation and for all the efforts by AMAA in support of our beloved Artsakh. The cultural event concluded by a benediction offered by Primate Bishop Najarian.

The AMAA Centennial Worship Service was held on Sunday March 18 at the Armenian Evangelical Uniting Church of Sydney led by the pastor of the Church Rev. Hagop Sarkissian. The Sanctuary and the adjacent Hall where the service was fed on a large screen were filled to capacity. Among the worshippers were Harutunyan, State Minister of Artsakh; Kaylar Michaelian, Permanent Representative of Artsakh in Australia; NSW Premier Honorable Gladys Berejiklian; Her Worship Mayor Gail Giles-Gidney of the City of Willoughby; Rob Floyed representing the President of the Uniting Church in Australia Stuart McMillan, and many distinguished guests. A special plaque was presented to Premier Berejiklian who greeted the audience and expressed her thanks for this special award. She congratulated the AMAA for its 100 years of faithful service and wished the Association many more years of outstanding service. Zaven Khanjian, AMAA Executive Director/CEO addressed the congregation and brought the greetings of the worldwide AMAA family. Rev. Dr. René Léonian, President of the Union of the Armenian Evangelical Churches of Eurasia, delivered the message and spoke about the mission of the AMAA in particular and the mission of the Armenian Evangelical churches worldwide in general. All the guest ministers from overseas participated in the Worship Service with prayers and reading of the Scriptures. The highlight of the Centennial events was the Banquet held at the Miramare Gardens in Sydney. Among the 280 guests, there were many distinguished guests, including representatives of the Uniting Church of Australia, His Grace Bishop Haigazoun Najarian Primate of the Armenian Apostolic Church of Australia and New Zealand and Father Parsegh (Basil) Sousanian of the Armenian Catholic Parish Community of Our Lady of the Assumption.  AMAA President Dr. Darakjian in his remarks recounted a brief history of the AMAA and highlighted some of the giants of the Association such as Rev. Dr. Giragos Chopourian and Rev. Dr. Movses Janbazian. “It is our duty to be faithful to this legacy and pass it on to future generations,” said Dr. Darakjian. AMAA Executive Director/CEO Zaven Khanjian delivered the keynote speech, concluding, “Looking forward, the AMAA is on track with an ongoing journey of goodness. God has called the AMAA to face our nation’s spiritual and humanitarian challenges and assume a leadership role. We are called to continue to sow hope, win a smile, realize a dream, feed the hungry and save a soul.” Khanjian thanked all those involved in this memorable and historic celebration. Rev. Dr. Youmshajekian, on behalf of AMA-Australia, presented special plaques to the sponsors, donors and guests and to Harutunyan, who graciously traveled to Australia to be part of these special Centenary celebrations.

In his concluding remarks, Harutunyan once again thanked AMA-Australia for this special invitation to represent the Artsakh Republic. Harutunyan spoke about the current situation in Artsakh. “I praise the AMAA’s mission in Artsakh” he said, “and particularly the work it does for the welfare of the children who are our future generations.” The Banquet concluded with the singing of the Hayr Mer (The Lord’s Prayer) and a Benediction delivered by Rev. Berdj Djambazian, President of the Armenian Evangelical World Council.

During the course of the week, the overseas guests paid official visits to Primate Najarian of the Armenian Apostolic Church, Father Sousanian of the Armenian Catholic Parish as well as to the Hamazkaine Galstaun College and AGBU Alexander Primary School.